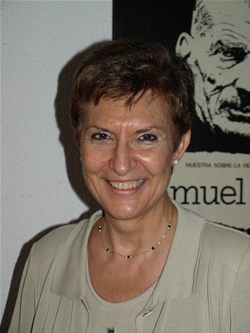 Susana Onega is Emeritus Professor of English and member of the Research Institute in Employment, Digital Society and Sustainability (EIDIS) at the University of Zaragoza. She is also a coopted member of the Academia Europaea. She has been leader of numerous competitive research projects and teams and written extensively on contemporary English fiction, narrative theory, and ethics and trauma. She is the author of five monographs, including Form and Meaning in the Novels of John Fowles (U.M.I. Research Press, 1989), Metafiction and Myth in the Novels of Peter Ackroyd (Candem House, 1999), and Jeanette Winterson (Manchester UP, 2006). She has edited and translated into Spanish The Collector (Cátedra 1999); and edited or coedited fourteen books, including “Telling Histories”: Narrativizing History / Historicizing Literature,  (Rodopi 1995), Narratology: An Introduction (Longman 1996); Refracting the Canon in Contemporary Literature and Film (Rodopi 2004), Ethics and Trauma in Contemporary British Fiction (Rodopi 2011), Trauma and Romance in Contemporary British Fiction (Routledge 2013), Liminality and The Ethics of Form in Contemporary Trauma Narratives (Routledge 2014), Victimhood and Vulnerability in 21st-Century Fiction (Routledge 2017), Traumatic Memory and the Ethical, Political and Transhistorical Functions of Literature (Palgrave 2017), The Wounded Hero in Contemporary Fiction: A Paradoxical Quest (Routledge 2018), and Transcending the Postmodern: The Singular Response of Literature to the Transmodern Paradigm (Routledge 2020).