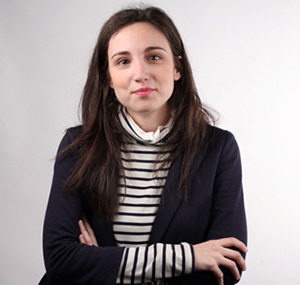 Pilar Royo-Grasa is Lecturer at the Department of English and German Philology of the University of Zaragoza, where she is currently teaching courses on English Language and Literature in the Bachelor Degrees in English Studies and in Modern Languages.

She graduated in English Philology at the University of Zaragoza in July 2008 and was subsequently awarded the Extraordinary Degree Award in March 2009. After her graduation, she was selected to work as a Spanish Language Assistant and Teacher at Sevenoaks School (U.K.) during one academic year.

In March 2010 she was granted a four-year postgraduate scholarship by the Science, Technology and University Department of the Aragonese Government (DGA) and in October 2010 won a competitive national fellowship (FPU) financed by the Spanish Ministry of Education and Science. These merits secured her position in the Research Team Contemporary Narratives in English. She subsequently obtained the Master's degree in Textual and Cultural Studies in English from the University of Zaragoza in November 2010 and, in June 2015, was awarded with cum laude her PhD in English Studies after defending her doctoral dissertation “A Study on the Representation of Trauma in Gail Jones’s Black Mirror (2002), Sixty Lights (2004) and Sorry (2007).”

She has also been a Visiting Scholar at the Universities of New South Wales (Australia), Northampton (U.K.) and Regensburg (Germany). From October 2015 till January 2018 she acted as Secretary of EASA (European Association for Studies of Australia).

Her main research interests are contemporary Australian fiction, postcolonial literature, trauma studies, human rights and migration narratives. She has given undergraduate and postgraduate seminars and presented papers on the said topics at international universities and conferences. She is the author of the chapter “A Dialectics of Trauma and Shame: The Politics of Dispossession in Gail Jones’s Black Mirror” in the Routledge volume Victimhood and Vulnerability in 21st Century Fiction, edited by Jean-Michel Ganteau and Susana Onega (2017). Articles written by her have been published in the Journal of Postcolonial Writing, Commonwealth Essays and Studies, Journal of the Association for the Study of Australian Literature, Journal of the European Association for Studies of Australia and Odisea: Revista de Estudios Ingleses.

Her most recent publications include  the article  “Gail Jones’s ‘The Ocean’ (2013) and A Guide to Berlin (2015): A Literary Challenge to Asylum Seekers’ Precarity” in the Journal of Postcolonial Writing (https://doi.org/10.1080/17449855.2020.1771913), the chapter “Transnational Identity as Represented in Roanna Gonsalves’s The Permanent Resident” in the Serial Publication Indian Diaspora and Transnationalism: Trends and Issue in the 21st Century, edited by Ajaaya K. Sahoo and P. Venkata Rao (ISBN-13: 978-8194556305), and has co-guest-edited with Dolores Herrero the special issue “Dystopian Scenarios in Contemporary Australian Narrative” in Humanities (ISSN 2076-0787). She is also the Guest Editor of the special issue of The European Legacy, entitled “Globalised Capitalism and Its Destitute Masses,” which is due to appear at the end of 2021.