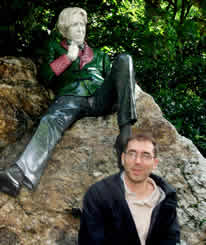 José M. Yebra Pertusa is a lecturer in English at the Centro Universitario de la Defensa (attached to the University of Zaragoza). He graduated in English at the Department of English and German Philology at the University of Zaragoza, where he obtained his M. A. on Restoration drama and gender. He wrote his PhD thesis on postmodernist British literature, concretely on identity, gender and intertextuality. He is currently working on trauma, ethics and sexual dissidence.

He has presented papers on the topics mentioned above in conferences both in Spain and abroad. He has published articles in specialized journals such as “The Belated Trauma of AIDS in Alan Hollinghurst’s The Swimming-pool Library” (Winter), “Retro-Victorianism and the Simulacrum of Art in Will Self’s Dorian: An Imitation” (RAEI), “The “Moving” Lines of Neo-baroque in Will Self’s Dorian: An Imitation” (Atlantis), “The Interstitial Status of Irish Gayness in Colm Tóibín’s The Blackwater Lightship and The Master” (Estudios Irlandeses), or “Neo-Victorian Biofiction and Trauma Poetics in Colm Tóibín’s The Master” (Neo-Victorian Studies). He has also published book chapters such as “A Terrible Beauty”: Ethics, Aesthetics and the “Trauma of Gayness” in Alan Hollinghurst’s The Line of Beauty (Rodopi).