Francisco Collado-Rodríguez is Professor of English (American Literature) at the Department of English and German Studies of the University of Zaragoza. He 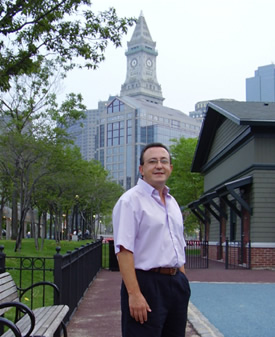 graduated with honors in English, also receiving an academic award, at the University of Extremadura. Subsequently, he won a competitive national scholarship to carry on his doctoral studies at the universities of Extremadura and Edinburgh. He currently teaches two courses on 20th-century American Literature and a more specialized master course focused on recent narratives and the notion of the posthuman self.

Francisco Collado-Rodríguez teaches contemporary American literature and popular culture at the University of Zaragoza (Spain). President of the Spanish Association for American Studies (SAAS) from 2007 to 2011, he has written extensively on the influence of fantasy, myth, and scientific discourse on modernist and fiction, as well as on ethics, trauma, and the posthuman condition. In 2004 he published a book on the works of Thomas Pynchon: El orden del caos: literatura, política y posthumanidad en la narrativa de Thomas Pynchon, which was awarded the National Research Prize by the Spanish Association of Anglo-American Studies (AEDEAN). In 2007 he co-edited with Nieves Pascual and Laura Alonso the book Masculinities, Femininities and the Power of the Hybrid in U.S. Narratives: Essays on Gender Borders. Among his publications in later years are the edited volume Chuck Palahniuk: Fight Club, Invisible Monsters, Choke (Bloomsbury, 2013), and the articles “Trauma and Storytelling in Cormac McCarthy’s No Country for Old Men and The Road” (Papers on Language & Literature 48.1,  2012), “Textual Unreliability, Trauma and the Fantastic in Chuck Palahniuk’s Lullaby” (Studies in the Novel 45.4, 2013),  “Meaning Deferral, Jungian Symbolism, and the Quest for V. in Thomas Pynchon’s The Crying of 49” (Critique: Studies in Contemporary Fiction 56.3, 2015), "Intratextuality, Trauma, and the Posthuman in Thomas Pynchon’s Bleeding Edge" (Critique: Studies in Contemporary Fiction 57.3, 2016), and “The Holy Fool’s Revelation: Metafiction, Trauma, and Posthumanity in E. L. Doctorow’s Andrew’s Brain” (Papers on Language & Literature 53.4, 2017).