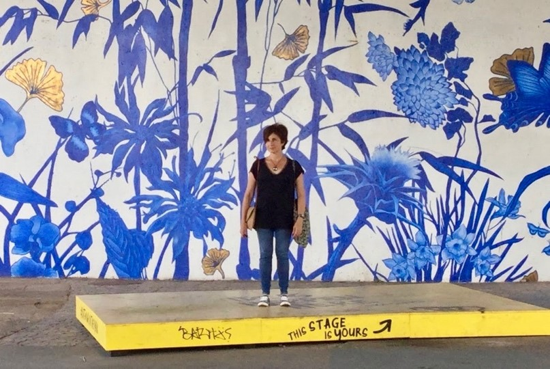 Bárbara Arizti is Senior lecturer in English Literature at the Department of English and German Philology of the University of Zaragoza and a member of the research team “Contemporary Narrative in English”, funded by the Aragonese Government. After taking her degree in English Philology, she worked as a Spanish Assistant Teacher in York, UK, for an academic year. In 1991, she obtained a competitive national scholarship to pursue her doctoral studies in Zaragoza and Norwich (School of English and American Studies, University of East Anglia). She was Research Fellow until the year 1994, in which she began teaching. Arizti co-edited the journal Miscelánea: A Journal of English and American Studies between the years 2006 and 2013 (Literature, Film and Cultural Studies volumes) and has been the secretary of the department since 2016. She is also a member of the University Research Institute for Employment, Digital Society and Sustainability (IEDIS-University of Zaragoza), founded in May 2021.

She wrote her doctoral thesis on David Lodge under the supervision of Dr. Susana Onega and authored the book ‘Textuality as Striptease’: The Discourses of Intimacy in David Lodge’s Changing Places and Small World (Peter Lang, 2002). In 2007 she edited with Silvia Martínez-Falquina the collective volume On the Turn: The Ethics of Fiction in Contemporary Narrative in English (Cambridge Scholars Publishing). More recently, together with her colleagues Silvia Pellicer-Ortín and Silvia Martínez-Falquina, she has published the special issue Beneath the Waves: Feminisms in the Transmodern Era (https://www.tandfonline.com/toc/cele20/26/3-4) for The European Legacy: Toward New Paradigms, Taylor and Francis, vol. 26. 3-4 (2021). Arizti is the author of several articles and book chapters in scholarly journals as well as prestigious publishers on Lodge and other writers like Tim Winton, Jean Rhys, Jamaica Kincaid, Janette Turner Hospital, Carmel Bird, Daniel Berrigan, Richard Flanagan and Ian McEwan. She is a regular contributor to conferences, especially those organised by AEDEAN, ESSE and EASA. Her main research interests are postcolonial literature and criticism. She is a specialist in contemporary Australian literature, the relationship between ethics and the novel, Trauma Studies, Memory Studies and Transmodernity. Some of her latest publications are “Inez Baranay’s Ghosts Like Us as a Stolperstein” (The European Legacy: Toward New Paradigms, 2021); “‘At Home with Zoe’: Becoming Animal in Charlotte Wood’s The Natural Way of Things” (Humanities, 2020); “A Transmodern Approach to Post-9/11 Australia: Richard Flanagan’s The Unknown Terrorist as a Narrative of the Limit” (Transcending the Postmodern: The Singular Response of Literature to the Transmodern Paradigm, Routledge, 2020); and “From Egology to Ecology: Elements of the Transmodern in Tim Winton’s Eyrie” (Transmodern Perspectives on Contemporary Literatures in English, Routledge, 2019).

Arizti combines her academic career with an intense outreach activity. Together with the cultural association Celtic Airs, she has taken part in several editions of “European Researchers’ Night” (2013-2019), in the celebration of “Bloomsday” in Zaragoza (2014-2020), in the six-session seminar “¿Quién Conoce a James Joyce?: Iniciación al universo joyceano”, held in the Teatro de las Esquinas, Zaragoza (2015), in the act “Celebrando a Yeats” (2015) and in the “Semana Cultural Irlandesa de Zaragoza” (2016, 2017), among some other concerts and poetry recitals.